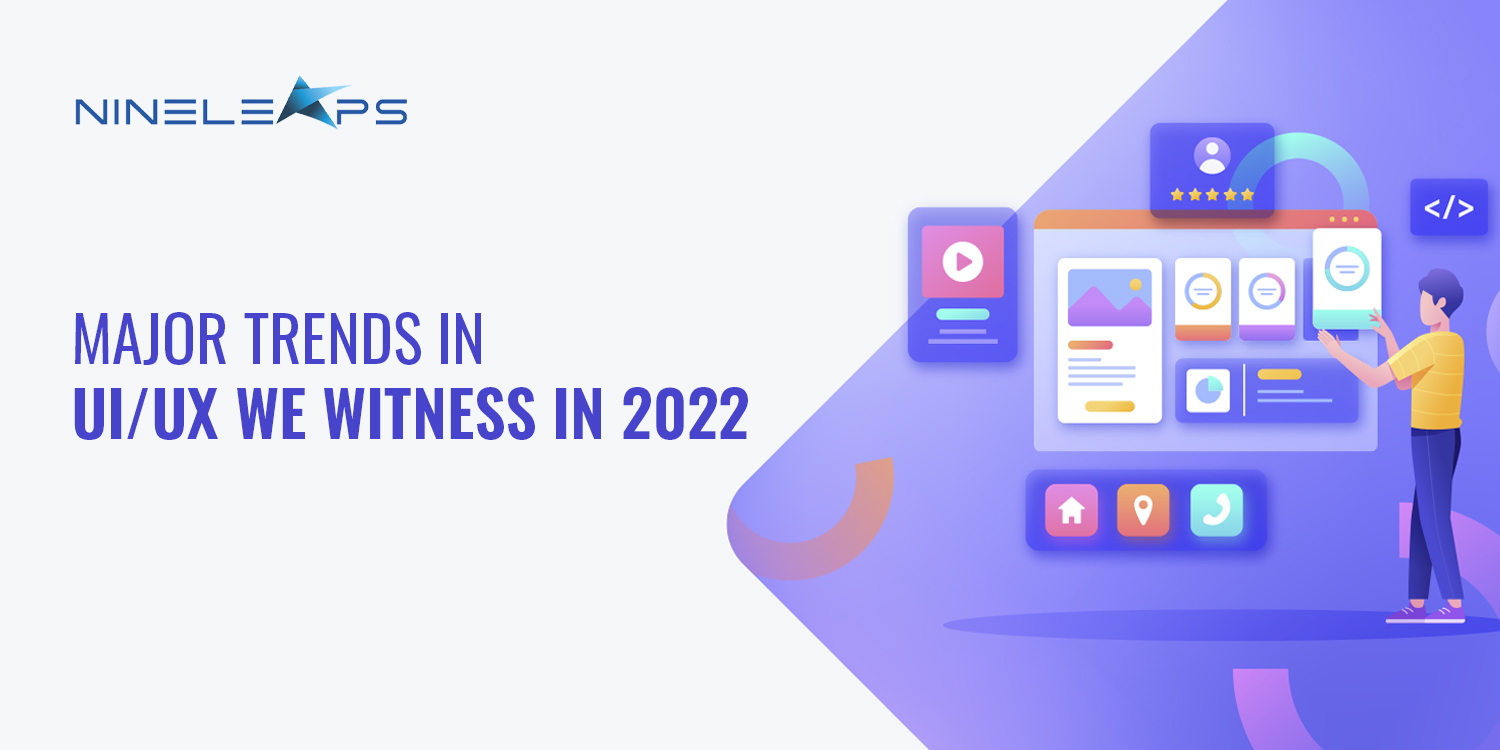 Building experiences that are both engaging and immersive has been constantly evolving to impress while meeting the needs of every turbulent audience across multiple age groups.

This change is especially apparent in the modern era of remote working. This era has gracefully given rise to the building of a new age infrastructure to get anything and everything without having to lift a finger.

Reliance on technology as the first forefront has exponentially increased and competition between who can provide the best service is increasingly intense. Where service becomes a variation of oneself, organizations and businesses are setting themselves apart through the experiences that they offer.

Functionalities both new and old are making a rise to help consumers indulge in the experiences that they create and newer and fresher cycles of trends are being born.

This article explores the newer UI/UX trends that have emerged and are currently dominating the market.

One of the more easily witnessed trends in the modern UI/UX community is Dark Mode. Born as an experiment in 2016 by Twitter, it shot to fame when Apple decided to release a dark mode option in its iOS 13 update back in 2019. The design style visually presents a darker background with lighter text in the foreground and was conceptualized to reduce strain in the eyes by reducing the luminance emitted by the device screens. This and its other benefit of reducing the battery discharge time of the devices is what made it extremely popular. Dark mode is now a prevalent optional feature in almost all the major devices across brands. If the products you are designing require the end-users to spend a lot of time looking at their screens, adding a dark mode option would go a long way in retaining them.

A widely popular trend that seemingly keeps returning to the forefront of UI/UX design over the years, attracting both designers and end-users alike is Skeuomorphism. It first began to take shape in the early 1980s, when the idea of using design items to resemble their real-world counterparts to present an intuitive experience to the end-users. For example, the phone icon on a smartphone or the trash can icon on the computer represents their real-world functions. Skeuomorphism shares much of love/hate relationships with all its various stakeholders. It has died from design and risen again so many times that designers have started to revere it.

Skeuomorphism will always remain useful but must always be viewed as a stepping stone to design rather than an absolute must.

Neumorphism is a new trend that has recently been taking the world of design by storm. It follows an evolutionary thread from skeuomorphism though establishes a separate standing for itself in a different niche. Neumorphism utilizes the realism that skeuomorphism offers and combines it with the minimalism of the flat design to create realistic elements that could work in real life. The interface that it offers creates an opportunity for end-users for realistic interactions that resonate deeply with the users. A truly neuromorphic design requires real depth or lack of. Neumorphism, while giving the end-users a good experience, maybe an ant trap waiting to be sprung. The visual elements, if not done properly, may lead to accessibility issues and thereby create a negative resonance amongst an audience of its users but when used right with the necessary strategies to provide comfort than create anxiety amongst users.

The simple directive of moving a particle of a design makes a monumental change to how a user experiences it. Animations and Transitions add a layer of attraction to any UI visual and create a sense of amusement in the eyes of the end-users. While this golden platter with a surety of delivered experience, it hides behind it a huge flaw. Meaningless yet fancy transitions may amuse the users to a degree that they might end up getting distracted rather than getting the job done.

Good animations should strike a balance between amusement and the purpose of the design. Adding motion elements that enhance the design to direct the user towards a specific goal assures amusement, enhanced experience and most importantly user satisfaction.

Use animations to tell stories, and establish a guided motion towards telling a story, giving the central role to the users themselves. Build micro-interactions to let users experience a moment of joy and create more intuitive experiences.

When it first came into existence, Bold Typography took the center stage right away, the limelight shining straight down on it and making all the guidelines that made UI design what it was obsolete and establishing a new way of thinking. It showed the world how a well-meaning phrase can impact the mindset of the end-user.

Introducing typography as the main element in a design created a whole new path of how particular information can be presented. However, overusing the technique might backfire and cause design fatigue in the minds of the end-users.

Planning and strategizing the use of bold typography in situations where they would be the most effective is recommended.